Sign up or Login to add notes to this property.
Print Brochure

Welcome to 335 Clifton St. This elegant Craftsman home underwent a permitted to-the-studs renovation in 2016, including the addition of a second story. Set in Rockridge, along the Temescal border in North Oakland, the house is steps from College Avenue and a 10-minute walk from the Rockridge BART station.

Originally built in 1913, the sellers are the second owners of the property. They purchased the then 1 level home in 2014 and spared no expense transforming it into their Rockridge dream home.

The home now boasts 5 bedrooms and 4 full bathrooms, totaling 2,396 square feet of living space. This is split between the 4BD / 3BA main house (2,180 SF), and the STUDIO / 1 BA stand-alone cottage (216 square feet), which was completed in 2018. A detached office (not included in the square footage) is situated at the back of the 4,480-square-foot lot, adding 120 square feet of flex space. It is equipped with its own heating unit.

From the new EBMUD SmartMeter at street level, the entire house was plumbed with new copper pipes, and finished with solid brass fixtures in 2016. All three bathrooms in the main house are new. The en-suite master bath features radiant floor heating, an enameled cast iron soaking tub with separate hand shower, dual wood vanity with natural white stone counter and modern square sinks, private shower with custom height low-iron glass door, marble tile surround, a bidet toilet with remote, and solid brass towel bars and hooks. The second upstairs bathroom includes a tub / shower combo with a separate handheld faucet and tile surround, a wood vanity with marble counter, and a linen closet. The full downstairs bathroom includes a wood vanity with one piece of enameled cast iron as counter and sink, a shower with custom height low-iron glass door and a separate handheld faucet, and tile surround (including the shower ceiling). The house is sewer lateral compliant. (Certificate No. 19714 / Exp. 12/30/2021).

The fourth bathroom, located in the detached studio, was completed in 2018. The tiled shower has a marble floor, a Grohe faucet and a glass door. Hot water is On Demand to the whole property, from a tankless system that includes a re-circulation pump and two remotes (installed in 2016).

The chef's kitchen, completed in 2016, features a Viking Professional series gas stove, with 6 burners plus a griddle and two ovens, and a  200 cfm Viking Pro hood with multi-speed fan, recessed lights, and warming lights. The counter-depth Bosch refrigerator is a stainless\ steel French door model with interior filtered water dispenser. There is also an under-counter beverage refrigerator, a microwave, and a Viking dishwasher. The counters are quartz, including a waterfall edge on one side. The enameled cast iron farm sink with brass faucet includes two spray functions and is served by a garbage disposal. The modular Italian tile surround features a custom oak tree mural backsplash. The kitchen includes recessed can lights and modern pendant lighting, as well as ample storage and a built-in banquette for cozy family breakfasts. The kitchen has a new Marvin Integrity French door opening onto a clear grade Cedar deck that was built in 2017. All downstairs windows in the kitchen, dining room, den, library and hallway are new (2016), and include custom top-down bottom-up cordless cellular shades.

The second-story addition features a serene master suite, with its en-suite bathroom, with walk-in closet with custom built-ins, and attic access. The modern retreat also features a private deck overlooking the large backyard.

Ceiling height upstairs is 9 feet. The stairway and second and third upstairs bedrooms have stained white oak floors. Gas service was added to the house at the end of 2014, with all new duct work and a new Carrier furnace in 2015 and 2016.

Even the gas meter is new as of 2016, and was installed with an earthquake shutoff valve. In 2018, a ductless mini-split was installed in the studio, providing heating and cooling.

A new electrical panel was installed in 2016, providing modern service, including upgraded 220-volt electrical for the LG washer and dryer suite. The new whole-house electrical service was grounded by a copper rod in 2016.

A new concrete driveway was poured in 2019 (with permits).

In 2015, in preparation for construction of the second-story addition, Alameda Structural completed a new permitted foundation replacement, including the installation of French drains and a well for a sump (installed by East Bay Pump in 2016). The siding of the second-story addition is Allura shingle, a cement fiber board which carries a 50-year warranty. The roof was installed in 2016 - a cement shingle series with a 40-year warranty. New flashing, gutters and downspouts were installed as well, and in concert with the whole-house French drain and pump system. The lower-level stucco was redone, with the entire exterior of the house painted in 2016.

In 2019, a 10 x 12 outbuilding installed in 2014 was converted into an office with heat. This private room features French doors which overlook the yard, offering a retreat suitable as an office, a playroom, a Peloton escape, a wine cave.

Under the back deck, which houses the ejector pump that serves the studio bathroom, is extra storage space for yard toys and kids' bikes. The private yard has a potting area, a patio, a lawn, and a secret nook for composting or a dog run. The patio and lawn are separated by a custom cement planter. The property is home to lush plantings, including an olive tree, apple tree, passion fruit vine, fig tree, persimmon tree, and plum tree. A stately magnolia is a welcome addition to the front yard.

This is not a flip! 335 Clifton Street is a virtually new home that was lovingly transformed with luxury finishes for a family that hoped it would be their forever home. Don't miss this rare opportunity make this thoughtfully designed, turnkey Rockridge mini-compound your own! 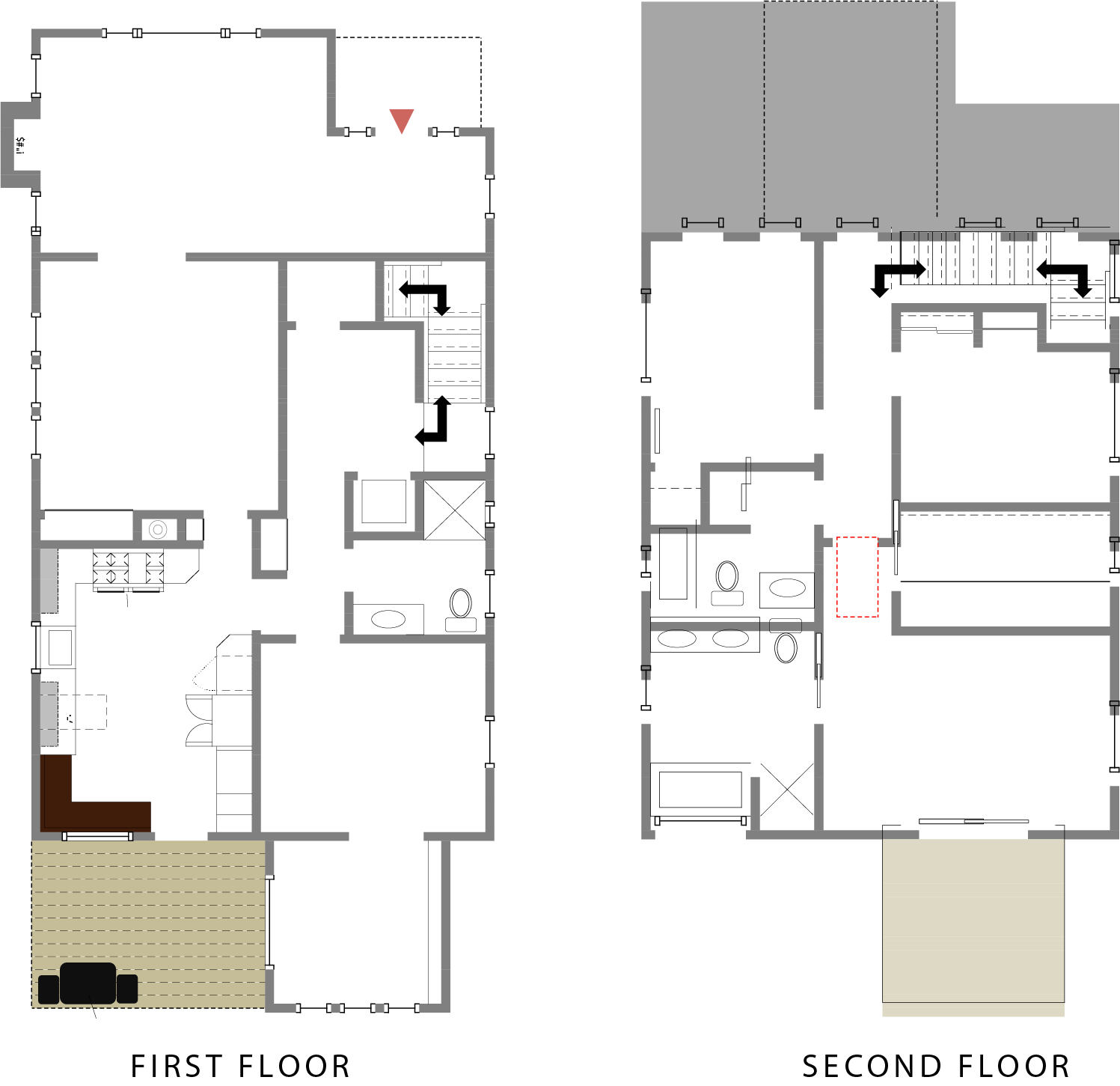 Sale Price as (%) of Asking Price

Prior to the mid-1800s, Oakland was largely a wild and undeveloped area. Much of what later would become known as Rockridge was also vacant land until the 1860s. That’s when a number of families from the east coast settled in the area. Among them was the Livermores, a New England family that had relocated west some two decades earlier and made their fortune developing lumber mills and dams around Folsom. With their wealth, the family scooped up large tracts of land in Rockridge, eventually establishing this area as a separate subdivision from Oakland.

Who gave the city its name? That credit goes to Horatio P. Livermore’s wife who, in a nod to an immense rock the family affectionately referred to as, ‘Big Rock,’ decided the area should be called Rockridge.

By the way, although most of Mrs. Livermore’s beloved Big Rock has been blasted away, you can still find portions of it near Glenbrook and Bowling Drives.

Considered by many to be the model of transportation integration, the centrally located Rockridge BART station blends retail, commercial, and residential interests into one seamless, workable neighborhood. What’s more, with trains traveling from Rockridge to Montgomery Station in San Francisco roughly every twenty minutes, living here and working in the City makes for an easy commute.

In a word, variety. While some areas of Rockridge consist of large homes that were built between the 1920s and the 1950s, others feature smaller bungalows and cottages. All of which means that, no matter your preference, you’re sure to find what you’re looking for here.

Sign up and receive email alerts when new listings come on the market.

Properties within a 1.5 mile radius with 5 beds and within 10% of this listing price

Information deemed reliable but not guaranteed. This information is being provided by the BayEast, CCAR or EBRDI MLS. The listings presented here may or may not be listed by the Broker/Agent operating this website.

McGuire’s Mobile App provided by MyTheo connects you with your agent on the go. Access Multiple MLSs, find upcoming open houses, create a saved search, add property notes, and chat with your agent in the app. Contact your agent today to get set up.

Compare Properties
View In A Driving Tour
Add To Favorites
Click The Property Boxes To Select Them.
Close